A small flotilla of ducks regard me serenely from the lake as I begin a vigorous set of calisthenics to warm up.

There are three of them, and all are still watching ten seconds later as I sit on a bench to pant and rest.

One of them, whom I have dubbed Little Waddler, swims ashore to plop next to me, in expectations of Bickies.

No, I say. No Bickies today.

Today we are turning over a new leaf.

Nay, not merely a leaf, today we are turning over the entire book.

But the bookcase is heavy.

Let’s stick with turning over a single leaf for now.

Little Waddler moves closer, as if I had not said no, but had said, as I have said many times before: Yes. Get ready for Bickies.

It is a good omen that an odd number of ducks have appeared to support me; the ultimate odd duck.

I’m wearing a new workout top so fancy it comes with directions. It took me three tries to get into it. There are strings and webbings and overlapping straps.  I nearly strangled myself putting it on. Now that I’m in it, I have to wear it forever. I’m fearful of what might happen if I try to take it off unassisted. If worse comes to worse the paramedics can cut me out of it.

The lake is in perfect fall glory. The leaves are swooning.

The clouds are migrating south and the geese are honking their joy. A single plop of goose poop paints a rock.

Fall always reminds me of new beginnings, which is why I have chosen this exact time to break in my new app: Couch to 5 K.  It’s a clever program of exercise that talks you through incrementally increasing walk/run intervals. Like boiling a frog.

As I fumble with my phone trying to find my favourite motivational running song the bossy female voice says: Walk Now.

Oh, dear. OK, she caught me off guard that time.

No problem. I will walk now, just like she said.

Then from out of nowhere she barks: Run Now!

Hmm. That was fast. I must have jostled the phone.

I will leave you far behind in my wake, Little Waddler.

Wow, I think. I’ve been running for a really long time. I’m getting winded. It’s only supposed to be a one-minute run interval before I walk again. This App is definitely broken. I feel like I have been running for five minutes now.

I check the time.

I’ve been running for 35 seconds.

OK! I’ll just walk for the rest of the 60 seconds until I get warmed up.

Why is Little Waddler still looking at me with those big duck eyes?

People walking their dogs give me the side eye as I ramble along with Little Waddler. That duck is fast.

I shout: Make up your frigging mind!

This App is out of control. She is a megalomaniac with control issues. Shut up, lady in the APP!

Why is this stupid APP called Couch to 5 K? They should call it “Drag your couch around the lake for 5 K” cause that’s what it feels like.

The boardwalk creaks beneath my feet. A branch filled with dogberries smacks me in the face.

I’ve been sitting around on my arse for far too long. On the couch. On the bed. On my yoga mat where I replaced my statue of Buddha with a bowl of big puffy Cheezies. Sitting with my dark companions: Anxiety and Depression.

Anxiety and Depression are eager to come out of retirement.

They are the cohorts who instigate evils and then disappear when it comes time to pay the piper. These cats like to gallop up and down the stairs at 3 in the morning.

Anxiety is the worry wart who frets nonstop: You can’t go out, you will fall down, you will trip up, you will meet someone you know who will say hi, and you will be stupid, and not know what to say back, and you will babble like the babbler you are, stay home.

Anxiety says: Ignore those bills. If you don’t open them they don’t count. Throw them behind the fridge.

I get myself off my arse, get my arse outdoors, moving around, arse in the world. I will give the term ‘arse-foremost’ a positive connotation.

I wheeze and sweat.

Damn you, Couch to 5 k. I would dash you to pieces on the ground except you are now cunningly hidden inside of my phone.

I finish crawling around the lake, Little Waddler ahead by a nose. I prop myself against a rock and we share the Bickie I carry around in my fanny pack for emergency purposes.

It’s not about my weight, I tell Little Waddler.

It’s about all the stuff that’s weighing me down. 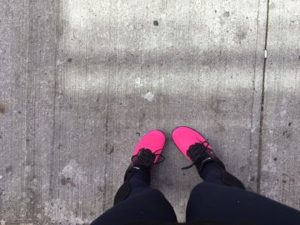 A leaf splattered with goose poop softly floats down to land poop-side down on one of my new pink sneakers.

I reach down and turn it over. Grateful.