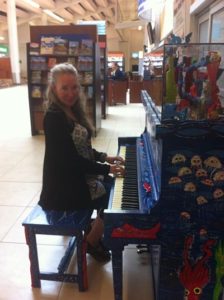 Most people are reluctant to leave paradise. They have to be dragged bodily from out of the swim-up bar. They linger over one more farewell fizzy cocktail, dear god please, and then what-the-hell another, just because. They savour one last lick from the tropical sun, already deep fried skin sizzles toward melanoma. They arrive red cheeked and boozy at the airport, trailing golden white sand behind like bread crumbs, except for the grains lodged in the crotch.

Then there is me.

Upon arrival in Barbados I immediately began planning my departure. The joy in unpacking for me is so I can repack. When I book a flight I am immediately launched into a flurry of lists, essential travel purchases such as books to read on the way (which I read before I leave and then have to go buy more) and endless experiments of packing and unpacking, usually involving trying to fit everything in my closet into a carry on bag. I become obsessed with bringing things that have no relevance to the trip and which I may not have worn in years.

It is not unusual for me to arrive in snow covered Labrador with flimsy flowered slips and no toothpaste.

I landed in Barbados with an anorak and a do it yourself macramé pot holder kit I’d been planning to do for ten years.

For my departure from Paradise I arrived at the Barbados airport three hours earlier than the usual three hour requirement, to be informed that the flight was six hours late. This left me with a total of twelve hours to kill while waiting for my flight to Toronto. For the average traveler this is a nightmare. For me it is ecstasy.

An airport to me is a Narnia of unknown magic. I am happiest just before departure, and just after arriving. From the overblown madness of Gatwick, to the stark blandness of St. Anthony, no airport is too large. None is too small. I have read of some exotic airports that have little tiny apartments for weary travelers to rent in order to rest, read, and recuperate. I aspire to live in one of those permanently.

When returning from Barbados I missed my connection from Toronto to St. John’s. The airline offered me a free hotel in Toronto. I thought it was a better idea to sleep sitting up outside of the vacant departures section. Even the janitor slept in the broom closet. It was there that I finished the final draft of my last book.

(Upon landing in Toronto at 1 a.m. I still believed I was going to make my 10 pm connection. Airports can be fountains of unreasonable optimism.)

So the airport for me is like one big office where everyone works for me. There is all the internet one can use. Tables and nooks and crannies everywhere. Foodstuffs, picnic areas, bookstores so large one can coopie down in a corner and read without ever having to buy anything. One can weep, laugh, rail against the world. Run naked. Reinvent oneself. Sleuth, scout, scour. Steal. (not one of my top recommendations but in a future blog I will offer some sound exceptions to the rule.) Get organized. Get stuff done. If you are lucky enough to hit one of the airports invested with a piano from BANL you can set up your own Tiki bar and play for tips. (Tasteful erotic table dancing included.)

I spend a lot of time killing time in airports.

Reading my series of tips called: Killing Time in Airports, will help prevent people from killing other people in airports. All of the recent rash of airport rage can be completely defused if everyone will read my blogs and buy the book. (When it becomes a book, which is my intention.)

Yes, this is shameless self-promotion, but while in an airport I came up with the theory that if I put as much energy into myself as I do into other people it might not be a bad thing.

Airports are the purgatory where we park our well-being while we are neither here nor there. They are conducive to melancholy because usually we are alone in the crowd. But recently I thought I would change this way of thinking. I was musing over text with a friend that someone really ought to write a book called Killing Time in Airports. And he said, sure, someone should, and it should be you.

There is no better place to contemplate your own death and wonder if your house is in order. It’s macabre, but how can the thought of the plane going down-down-down not crawl across the face of the denial we all indulge in when sailing through the air in a tin can.

I always try to board the plane as the person I want to be. Sometimes that is Susan Sarandon.

I always make a point of reaching out to my loved ones to tell them how much they mean to me, via text, because that way you don’t have to actually talk to anyone.

It’s the perfect place to do your will with an on-line will kit and then post it on Facebook so everyone will love you for leaving everything to charity. If the worst does not happen, you can take it down and change it back.

If your house is not in order, is, in fact, a big mess, you will realize that it doesn’t matter one iota and therefore save yourself countless future hours of futile tidying up.

Be kind. It will fuck everybody up.

Join me next time when Killing Time in Airports will bring you nifty tips on food & drink etiquette while in the airport, and how to use the travelator (the moving sidewalk in larger airports) as your own personal gym.

And remember. Every arrival is a new beginning, no matter where you get off.