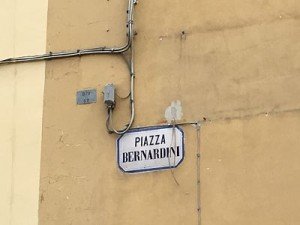 There is a cuckoo bird in Lucca whose sole pleasure is to unleash a wondrous and melodic refrain upon the innocent yogis of Il Borghino. This tiny creature flies many miles to arrive outside our villa each day just before dawn. It then begins to chime, exactly like a Swiss cuckoo clock. Except, unlike a Swiss cuckoo clock, which will only ever chime up to 12 times and then stop, the industrious cuckoo bird of Italy will chime endlessly, ceaselessly, enchantingly on and on and on until I open my window and throw a lemon at it.

Not to hit it, of course.

This to him is as bouquets thrown to the stage.

He flies away to his next gig.

But he will return on the morrow.

I go outside and retrieve my lemon.

Lemons grow on trees in Italia, and are therefore used for everything. They are robust lemons and glow with a shade of yellow so intense that to gaze upon an Italian 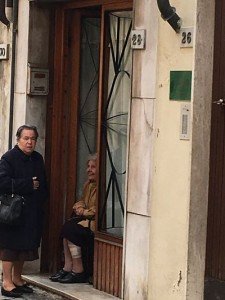 lemon with the naked eye is to risk going blind.

Similarly, the oranges here are of a deep intense hue, evocative of the lengthy burning sunsets of Mars.

There is also a little Italian blackbird whose song closely resembles that of Puccini’s “Sona andati?” from La Boheme.

Lucca is the birthplace of Giacomo Antonio Domenico Michele Secondo Maria Puccini and they have a huge festival in his honour here each year in order to raise the money to pay for the signage which bears his full name.

Immediately following this now beloved early morning ritual I pursue my next one.

My stalking of Oliver. 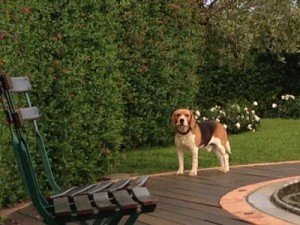 Oliver of the dark eyes and mournful gaze.

Oliver of the soulful looks and come hither sighs.

Oliver is an Italian beagle with floppy ears and a husky bark.

He more or less runs the villa here at Il Borghino. Each day I watch him as he embarks on his solitary and dogged (no pun intended) vigil of the grounds and surrounding hills and valleys.

I approach him with overeager pleas of “Come here, Oliver! Good boy, Oliver! Come on over here, Ollie!”

He stops and stares for a moment, regarding me with his clever soulful eyes. As if to say: “I am an Italian doggy.”

As if to say: “Why are you speaking to me in English when I am an Italian doggy?”

He barks and runs away.

But not too far away.

He runs a little bit but then stops to peer coyly over one furry shoulder before barking and running off a little further.

As if to say: “Alas. If only you were the one I have been dreaming of for all of my doggy years. The one who would complete me. The one who would truly understand me. I am an Italian doggy trapped in a vegetarian retreat. Do you perhaps have any bacon in your pocket?”

At breakfast sometimes I see him peering furtively through the glass doors of our little breakfast room. His eyes are so big and pleading.

Then I go to our always beautiful morning yoga class lead by our Melanie Caines, but while I am supposed to be at one with myself during meditation I am really outside of my body running in slow motion through fields of lemons with Oliver by my side, his floppy ears floating behind him in the breeze. We run and run and then picnic beneath a lemon tree on bacon bits and wine.

All of our days here at the yoga retreat are gently wrapped in bookends of yoga. Sometimes it’s really challenging kick ass yoga. And sometimes very thoughtful transformative yoga. I’ve come to think that as a group of yogis we are all things. We are a gaggle and a handful. We are a murmer and a flock and a parliament.

Those of us here at the Nova Yoga Retreat in Tuscany will forever be family. An exclusive group who for the rest of our lives will be the only souls on the planet with these particular memories, these particular experiences.

Such as the particular beauty of Cinque Terra! 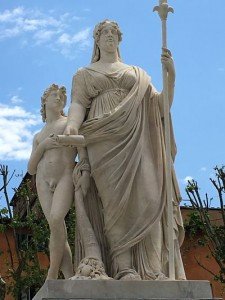 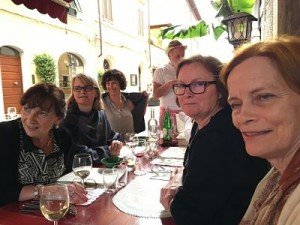 We would be so happy here!

The coastline and the marine life are protected.

There is a little levy they charge tourists when checking out of hotels, but it is approximately 6 dollars and not 600 dollars.

There are no fences along the waterfront. People and vendors are encouraged to populate the waterfronts. Jump into the ocean, even.

And, oh wondrous wonder. You traverse the five by either hiking! Or taking the train! 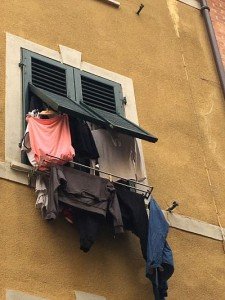 For the train novitiates among us: when taking the train is it very important to board the correct train, or to be more precise, board the train you wish to be on.

Always carry a little “mad money” or “pin money” to pay for the taxi back after you wind up someplace other than you intended.

It is also very important to disembark at the correct stop, or to be more precise, get off at the place you intended.

Reprise the advice about the pin money here. 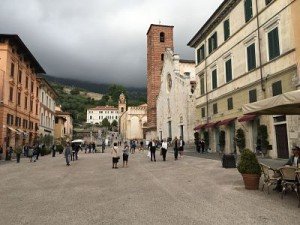 There were many things to do and discover while at Cinque Terra. My favourite was to climb the 500 ft. cliff at Carniglia and drink champagne at the very top.

If we ran Newfoundland in such a brazen similar fashion our waterfront in St. John’s would be completely accessible, there would be restaurants and booths set up all over the place, we would yell at tourists to sit down and eat their capelin outside in the rain drizzle and fog, chew that capelin head, demand money for it, and they would go away raving about what a wonderful time they had.

In my play Brazil Square, Mrs. Kent ultimately finds herself unable to leave her boarding house when the offer of a trip to Italy comes her way. When faced with her fondest dream she is crippled by the same fears and troubles that all of us have.

I am the same way, but here I have discovered that when life gives you lemons, throw them at something or someone.